It’s rhubarb season in my corner of world right now.

After passing over its crimson stalks at a many a farmer’s market, I finally decided to cook with rhubarb for the first time and do some recipe testing at the same time for an upcoming edition of my food and wine column over at Latte Magazine.

In researching rhubarb, I discovered that the English started cooking with rhubarb back in the early 1700’s and were the ones who first developed recipes for jams and the many sweet baked goods we enjoy today. They then introduced rhubarb to the US colonies though it didn’t take off straight away mainly because the method of cooking wasn’t well-known. Some unfortunate diners also inevitably ate the poisonous leaves instead as it was more widely considered as a vegetable back then rather than a fruit as it’s incorrectly thought of now.

In its raw state, rhubarb is extremely sour and crunchy but something magical happens when combined with sugar and cooked over a low heat. The flavour mellows as the fibrous stalks seem to melt in the saucepan producing a sweet thick coulis. 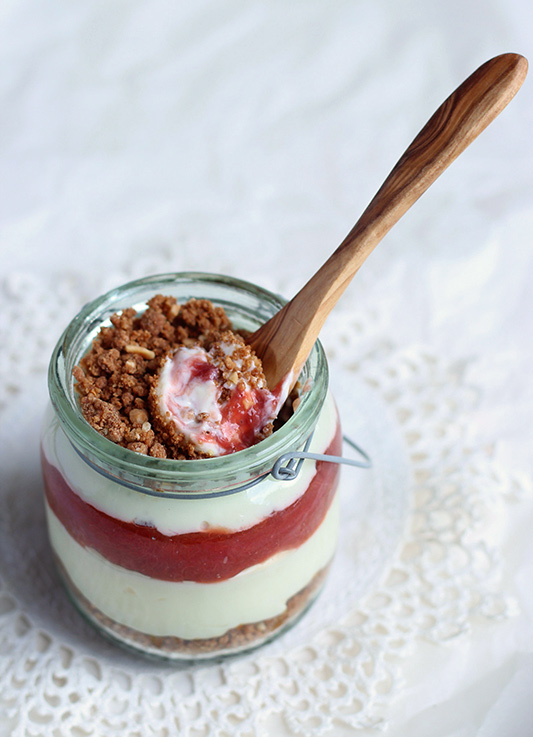 The cheesecake recipe for this dessert is my Grandma’s. She has used for this one for many years. It doesn’t require any gelatine and it always comes out perfectly each time.

The idea for the gingersnap or gingernut biscuit crumble (the name depending on where you come from) was something I was toying around with a bit in some other baked recipes over Christmas and finally, the inspiration for the stewed rhubarb came from a beautiful afternoon spent on the farm with the lovely Tamsin in Gippsland at her kitchen harvest seasonal cooking class a couple of months ago (more on that soon)

The crunch of roasted almonds and a little kick of spice from the cinnamon and ginger crumble combined with the sweet rhubarb and the semi tart cheesecake filling that brings it all together –in my opinion is a little bit of heaven in a jar.  You can make these a couple of days ahead and they are perfectly portable to take to your next gathering or picnic. 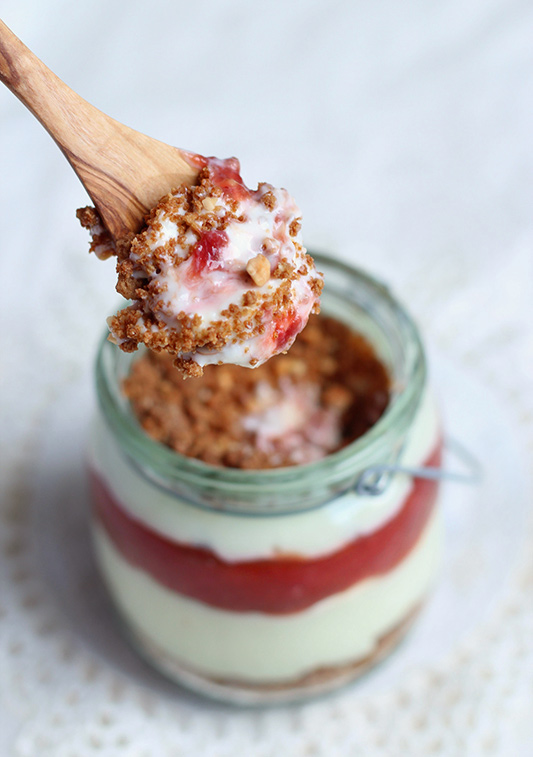