You are here: Home / All recipes / A Happy Birthday and the Cat That Got the Buttercream 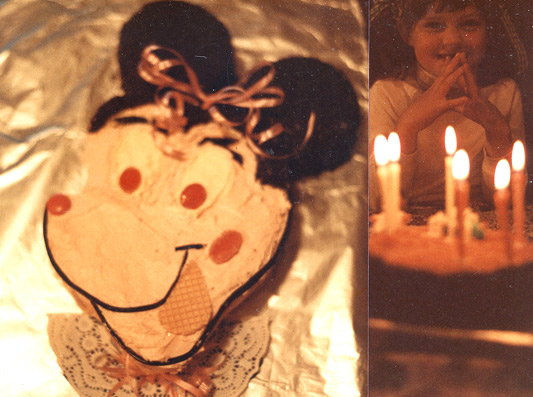 I LOVE BIRTHDAYS! My birthday, family birthdays, friend’s birthdays and even the Queen’s birthday. Yes, unfortunately each birthday celebration means I’m another year older but what better excuse to get together with good friends and eat cake…A LOT of cake! My best friend Jacinta on the other hand, would prefer that her birthday slipped by unnoticed – she says she’s in denial. This year she got her wish losing herself amongst the temples of Myanmar and completely alcohol free no less! I still sent her birthday cake though via email.

However, last year on a rare occasion when we were in the same country while I visited her in Argentina AND it was her birthday – I smuggled in a candle to place on the dessert we savoured as the last dish of a divine 10 course degustation lunch at the Ruca Malen Winery, Mendoza with nothing but endless vines and the stunning Andes Mountain range to take in. She humoured me – just this once. It was the perfect day!

This year for my birthday, I’m off to the Macedon Ranges to stay in a converted church for the weekend with a lovely big group of friends. The puns have already started for this group of sinners so I imagine 10 Hail Mary’s should do it for endulging in a glorious weekend of food and wine gluttony.

To mark this year’s birthday I thought I’d attempt one of the epic cakes from the Women’s Weekly Birthday Cookbook, which my Mum has now passed onto me. If you were a child of the 80’s growing up in Australia, then no doubt somewhere in the photo albums will be a cake of some description from this well loved book.

The book has enjoyed somewhat of a nostalgic renaissance in recent times with its fans setting up FB pages such as The Australian Women’s Weekly Birthday Cake Book is awesome , the blog Cake It to the Limit endeavouring to make each cake until the entire book has been made and even a 20th anniversary reprint by Women’s weekly.

Between my Mum and my Grandma, I was lucky enough to have the Swimming Pool, Mildred the Mouse, the Hickory Dickory Watch, the Piano, the Number 4 and Minnie Mouse. Below is a picture of my piano cake on my 7th birthday with my younger brother Ben helping me blow out the candles. My Grandma made this one which Mum says had a little “accident” in the car (it broke in half) on the way to the party unbeknowns to me at the time. 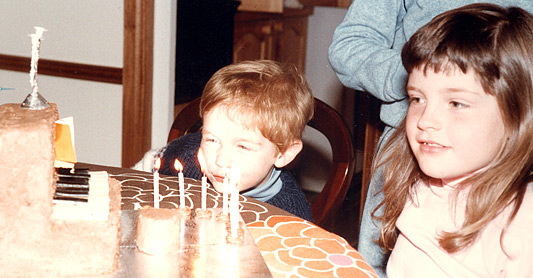 This year I’d thought I’d follow in my Mum’s footsteps and attempt the Hickory Dickory Dock Clock Cake thinking it looked simple enough in comparison to some of the other cakes. YEAH RIGHT?!!– talk about EPIC !

Having successfully completed my first Women’s Weekly birthday cake, I can honestly say that our mums were absolute champions for pumping out these bad boys year after year! I don’t know how they did it! So many different elements and delicate little decorations – the shopping trip alone could potentially take you as long as the cake!

Here is my step by step guide to making the Hickory Dickory Dock Clock Cake – turn back now while you still can!

Alernatively scroll to end to find out the tragic end that met my prized cake..you’ll never guess! 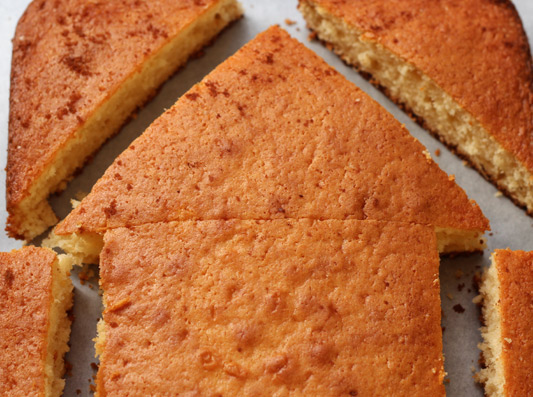 1. Bake one packet of vanilla cake as per instructions (you think I was going to make a cake from scratch with all the trimmings to go? No….Way!!!)

2. Cut out the cake shape and then gently with a knife, lightly trace out the clock face which you will follow when applying the buttercream

3. Make 1 portion of butter cream – divide into two lots – one for plain vanilla, one for chocolate 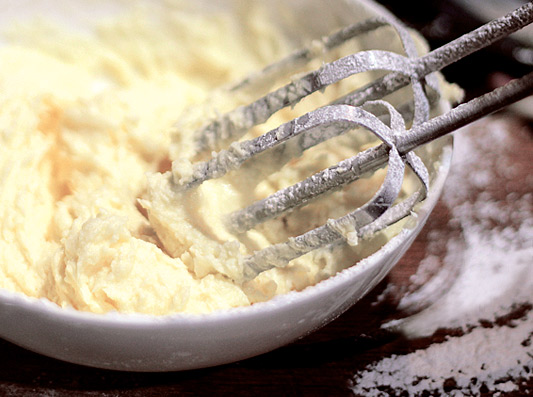 4. Make your liquorice trimmings, prunes, gather your pink smarties, hundreds and thousand buttons and chocolate bullets so they are ready to go.

5. Add vanilla clock face, then add chocolate around it 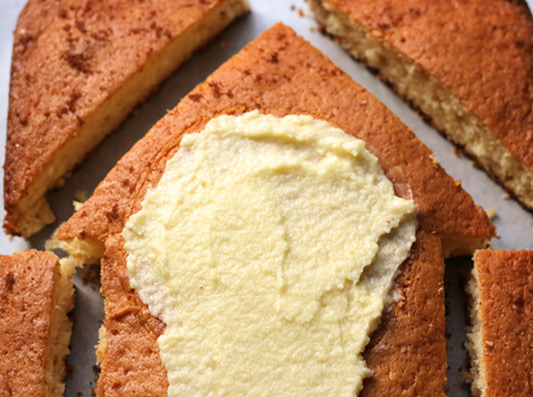 6. Add the smarties and chocolate bullets 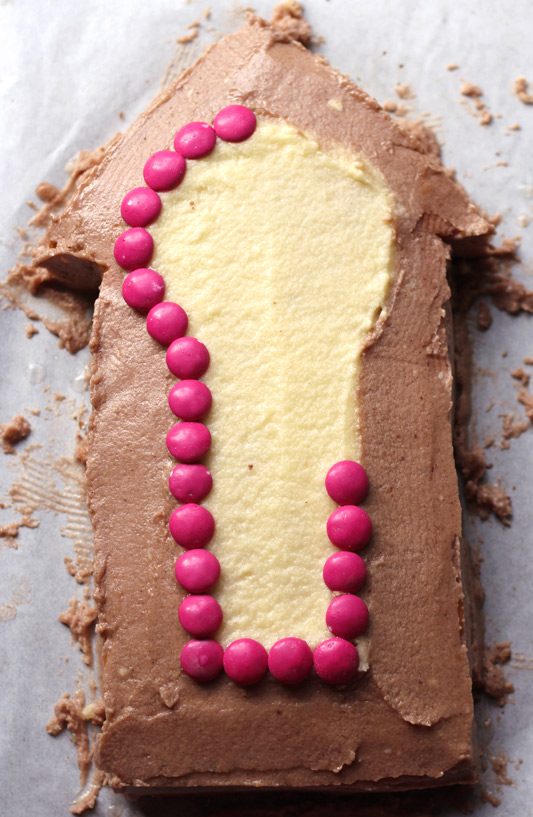 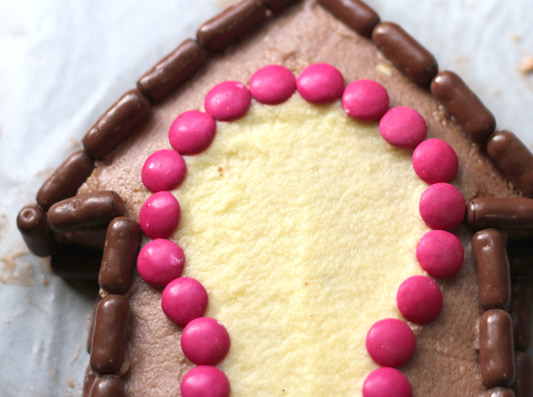 7. Assemble the mouse & add numbers to the clock face 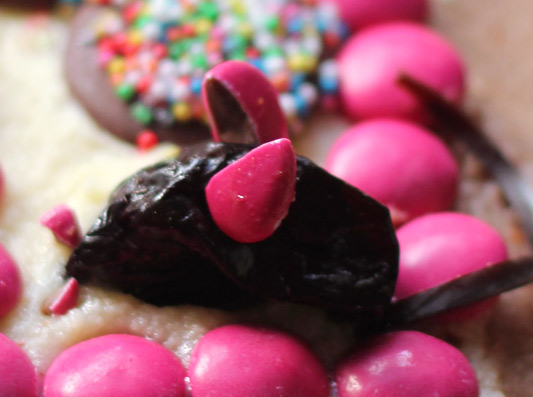 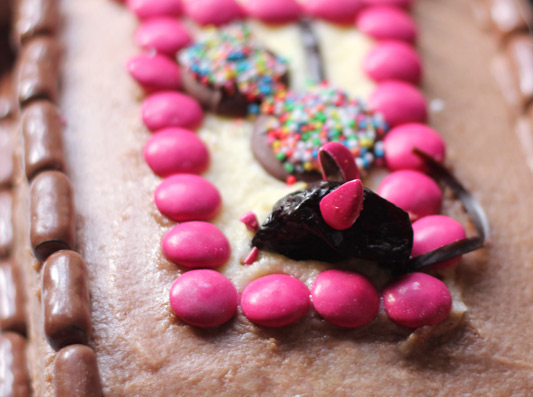 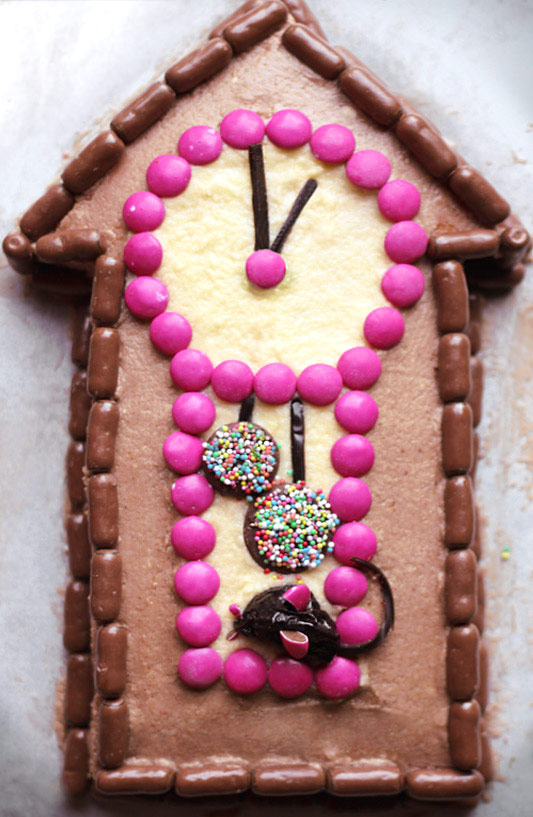 Have butter at room temperature then cream with the sugar. Add milk & colouring/flavouring

Pink smarties (2 x packets should give you enough)

THE CAT GETS THE MOUSE..and the buttercream!

After almost 3 hours from start to finish baking and decorating my cake and feeling quite chuffed with the result, I made a fatal error! Do not take your finished cake outside to photograph then by accident leave it on the verandah whilst distracted with partner arriving home from weekend away.

What happens is this; you return 30 minutes later to find the neighbours cat has demolished your cake before you’ve even had a bite! Yes readers, don’t think it wont happen to you! The result is a completely inedible cake and an inconsolable cook!

One might say it makes for entertaining blogging story since it involves a cat eating a cake with  a mouse on it and yes it does (now) but that kitty is still skating on thin ice for the moment. My other half on the other hand thought it was the funniest thing he’d ever seen –  He had obviously colluded with the cat and is now also one down on his nine lives… 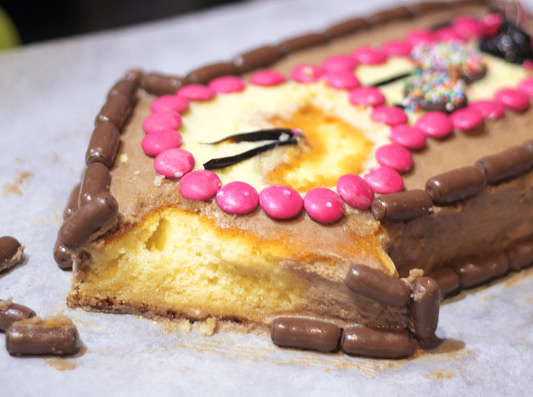 « Dance Like Nobody Is Watching ; A Recipe For Vegetarian Paella
Grandma’s Wintery Vegetable Soup »